Home › Places of Interest › Borobudur Temple is a Wonderful

Borobudur Temple is a Wonderful Image Reference: Borobudur Temple
Today, Borobudur has become the object of Tourism which attracts many tourists both local and foreign. Epic temple with beautiful architecture, beautiful place and even is the biggest temple that exist in Indonesia. In addition, Borobudur has become a holy place for Buddhists in Indonesia and became the center of the most important annual celebration of the Buddhist Vesak.
Borobudur is located approximately within 27 KM from Yogyakarta City. The temple is precisely Magelang Central Java. Driving a motorcycle takes approximately one and a half hour. Borobudur become one of the greatness and the evidence of human intelligence ever made in Indonesia. Borobudur become a tourist attraction and major in Indonesian culture.
Borobudur own words based on the first written evidence which was written by Sir Thomas Stamford Raffles, Governor General of United Kingdom in Java, which gave the name of this temple. There is no written evidence that older who gave the name to this temple Borobudur. The only documents which show the existence of the oldest temples Nagara Kertagama This is a book, written by Mpu Prapanca in 1365. In the book it is written that this temple was used as a place of Buddhist meditation.

Borobudur was built around 800 Masehi or the 9th century. Borobudur was built by the adherents of Mahayana Buddhism during the reign Wangsa dynasty. This temple was built in the heyday Sailendra dynasty. Founder of the Borobudur Temple, King Samaratungga derived from Wangsa or Sailendra dynasty. The possibility of this temple was built around 824 Masehi and was completed around the year 900 Masehi during the reign of Queen Pramudawardhani is the daughter of Samaratungga. While the architects who contributed to build this temple according to stories passed down through generations named Gunadharma. 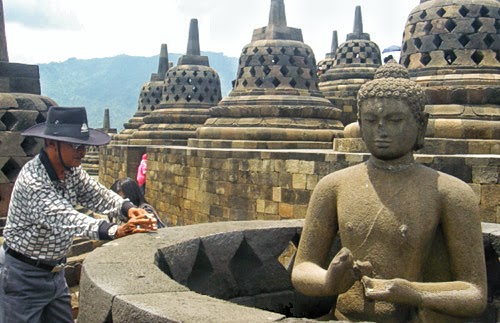 Image Reference: Buddhist temple
In the ceremony, the story is often dramatized around Borobudur temple courtyard. To introduce people to the origin or the story of this temple.
Borobudur is a strategic point between the largest river in the vicinity. It is estimated that in the wake of river rock to make this temple, so the temple can be completed perfectly. The temple reliefs depict worldly life to the life of the most enduring achievement. Borobudur has many imaginary line so that it starts from the basic to the tip of the temple has a different meaning : walking on the bottom (Kamadatu), body (Rupadatu) and head (Arupadatu). If we trace this Borobudor temple from below to above has many elements and levels of a different life.
A long times ago, the temple building was found in a damaged condition, which is filled with shrubs and large trees. Borobudor temple often to make improvements year after year. Because the fixes require high skills in order to maintain its shape, this temple repairs require many years to complete. And in the process of stone carving and stone cutting is very difficult to work even with today's modern equipment.
Subsequent restoration of Borobudur temple was inaugurated on 23 February 1983 by the President of the Republic of Indonesia, Mr. Suharto. It's written by stone inscriptions around the Borobudur Temple.
If we want to know more about Borobudur, we can learn at Manohara hotel for tourists who are studying Borobudur. In Borobudur, in this place there is also a museum building, who want to enrich other science. Borobudur is a mystery of an ancient civilization that became a major tourist destination for research and education, which is now maintained its beauty.
Share a moments
Label: Places of Interest
Next Post
Previous Post