Posted by: Epictravelers | Updated: July 21, 2017
Discover National Geographic - Rumah Budaya The Wonderful Indonesia. Rumah Budaya Indonesia is unique house a perfect blend of local traditional architecture, and local Traditional as part of Cultural Heritage Tourism. Rumah Budaya is one of the cultural values ​​contained crystallization in diversity, culture, religion, tradition alive in society and globalization as identification, identity, the recognition, preservation, and strengthening the nation's cultural identity.
Culture Indonesia is the whole idea, behavior, and Artistic Works of people or groups or community of people who thrive through the process of learning and adaptation to the environment that serves as a guide and rule for people's lives. That the whole process and the result of systemic interaction between religious culture, national culture, tribal culture, local culture, and global culture are interconnected and dynamic toward the progress of human civilization.
Read also in Exploring the Post Reference: (Wonderful Wood Carvings) opens in new window.
The Basic Information of Tourism
Rumah Budaya a Part of Cultural Heritage Tourism 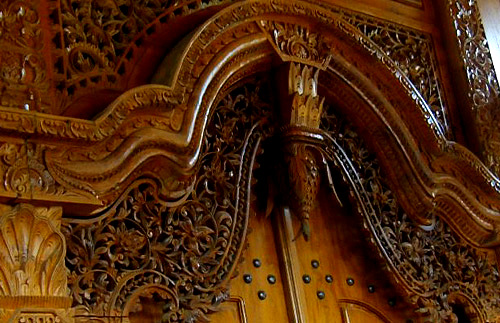 Image Reference: Rumah Budaya
Rumah Budaya Indonesia - Epic Nuance
Rumah Budaya Indonesia is one legacy of cultures that have significant value history which presents the Epic Nuance, Epic Science, Epic Industry, Epic of Culture Property, Epic Traditional, and Epic Technology, or art that have a process that produces value-added products, loaded with cultural messages, serves as a means of delivering a message that can influence on the thinking, attitude, and human taste. So that "Rumah Budaya" is one of the potential for the development of art society - traditional performances as well as part of Cultural Heritage Tourism Indonesia, and also become one of the diplomatic relations of cultural identity to the countries.
Rumah Budaya is part of a multiculturalism of local cultures, local knowledge, regional, national, archipelago, the system, the elements, the preservation of culture, identity, character, ethics, culturation, language, art, knowledge systems, the original wealth appreciation, values, customs, true legacy, culture heritage, diplomacy of culture and so on. So Rumah Budaya become a vehicle for education and development of education, especially in the field of tourism in Indonesia.
Read also in Exploring the Post Reference: (Joglo Java Buildings) opens in new window.
Rumah Budaya has hundreds of basic foundations that are epic stories and some of which are included with traditional cultural event art connections and cultural parameter or a numerical or other measurable factor forming one of a set that defines a system or sets the conditions of its operation. Basically formed to the original value (indigenous culture), ethnic communities, traditional leaders, the wealth of an art, the perfection of a cultural value, cultural property, local indigenous industry, local beliefs, local games and others.
These sciences are aimed at making humans more human or making people more cultured, and the value of messages in the intent and purpose of Cultural Heritage preservation. Other sciences will be implied: history, study of local languages, theology, philosophy, art literature, language literature, song literature, including even laws and rules.
Epic Culture Property
Preservation of infrastructure and culture facilities embodied in promoting growth and development of cultural management. The value of that culture will be implied in some Infrastructure, and Cultural Facilities.
The Infrastructure and Facilities of Culture, among others:
Description
Rumah Budaya Epic Industry
Rumah Budaya and Art Culture is a part of the culture industry, among others founded the art market and create an ad cultural nuances, also the introduction of local products. The aim is revitalize custom in carrying out cultural activities, cultural community or group of people who perform activities in the field of culture.
Cultural industries including:
Cultural Industries, directed to:
Local Belief
Local belief is a belief or grip embraced hereditary (ethnic) in a certain area. Including home building forms and local beliefs of society. The tradition of spoken language, among other: mantras, chant, rhymes, proverbs, folk songs, legends, myths, folk tales or fairy tales, traditional performing arts, and other forms of spoken language other traditions.
Epic Cultural, and Diplomatic Relations
Preserving cultural existence and through traditional connections:
Watch: Preserving cultural existence and through traditional connections. Mirror video.
Courtesy of Youtube: Epictravelers Pedesaan.
Duration: 6.13.
(1). Traditional Dance,
(2). Album: Chick and Soup - Chicken With The Bubble Gun.

Purpose and objectives:
Protection of History and Cultural Heritage
Values of a cultural character and the archipelago
Recognition, History and Preservation of Cultural Heritage through; traditional clothing, the name of local art as intended in realizing the value of cultural and archipelago character. Protection of History and Cultural Heritage will be implied, including:
Culture craft industry realized the value of the policies:
Plans and management culture
The management of Rumah Budaya; arts and culture includes cultural management perspective which also governs the planning, organizing, controlling culture, planning cultural management, arranged on plans and management culture.
Implementation of culture leads to towards the fulfillment of the rights of all cultures, strengthening identity, national character building, maintenance-defense of multiculturalism, respect for the history, cultural heritage, promotion of cultural industries, strengthening of cultural diplomacy, preservation of infrastructure, and institutional strengthening of human resources of culture.
Regards Rumah Budaya The Wonderful Indonesia. The great travel to explore.
Share a moments
Label: Basic Information of Tourism Insights Rural Creative Rumah Budaya
Next Post
Previous Post