Posted by: Epictravelers | Updated: June 02, 2013
Ledek art is one of the many types of folk art in the province of Yogyakarta Special Region. Local epic art world and products that are typical of the city of Yogyakarta that follow developments through fascinating traditions at that time. This art is usually carried out in villages and carries traditional gamelan instruments. The gamelan performed is quite a bit and not as much as gamelan instruments such as when performing Karawitan music or Javanese Langam music. Gamelan is be carried is: Kendang, Pelog, Saron and medium-size Gong. Ledek arts usually danced one dance or two players, and to bring gamelan usually consists of 4 to 5 men. 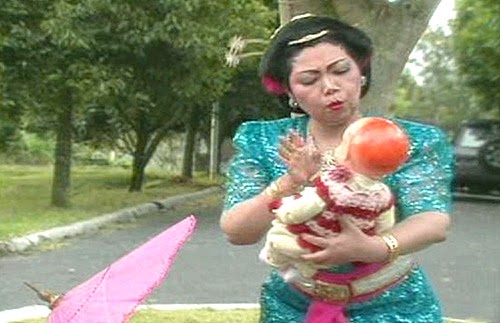 The clothes used in Ledek art character are Javanese clothes worn by male and female dance players, for women usually wear a bun on the head (gelungan - said the Javanese). Sinden is part of the complementary accompaniment of gamelan music performed by background dancers in this art. Usually sinden is done by female dancers, but in this art can also be done by male dancers or gamelan musicians.
Ledek arts often danced both men and women, and for men is usually only one person while Ledek arts there are two kinds: First this art prioritizes dance only and the second is a dance that contains skits. Ledek arts containing skits, usually male players often wear a mask covering the face. This is not a shy man, but the players have to show him her sad expression. Because men may be difficult forlorn expression, then comes the idea of wearing a mask of sad. And usually one of these performing arts dancers carries baby dolls or replicas carried in front of his body.
According to most people's stories, dramas like: Ledek with her doll. It tells of a family that longed for a baby, or crave the presence of a small baby. In this arts was illustrated with interesting movements and created funny to attract small children and other audiences.
Ledek arts moved around, walking in the villages while offering arts. For those who want to see this work of art, usually Ledek dancing at home who pay them. Prices vary according to the agreement with the dancers. Costs approximately 50,000 (Indonesia Rupiah), the value of the currency is quite large at that time. While people often perceive typically people who have recently had babies/small children. Ledek arts also often accompanied by Javanese songs, like the song a baby and other Javanese song that was popular at the time. And the Ledek song, there is still person who sung the song and to this day.
Payment is usually Ledek at the end of the staging finished. Connoisseurs the arts Ledek art also perceived local people, who knew would the arts is staged by one of residents and residents who come free of charge.
During the trip, nearly ahead of the afternoon, came home very far away and the vehicle did not exist at that time. Ledek Players usually stay in one residents that received permission to settle temporarily, Residents as one feels a thing, for those who still preserve the art Ledek, which is rare in the area at the time.
And they lived or layover in one of resident. because they want to do not bother to homeowners. And they is receiving enough and one woven backing sheet made of Mendong for a layover sleep, and release fatigue while carrying of gamelan paraded around the village to village.
Because when that rare craftsman or maker of the bed, Ledek players can only sit and sleep on the floor/lesehan, it was quite comfortable for them. Lesehan now remain and a culture of Yogyakarta today. For homeowners typically provide food and drink coffee or tea while chatting and sharing stories. Homeowners sometimes felt uncomfortable talking longer. Because they were very tired and wanted them to sleep comfortably soon. Even so, these people would rather talk up to the night.
In the title of this article is the living history of art, art layout Ledek made along the way and a long time ago. This art still exist in Yogyakarta special region, but only found through various activities and different places.
Share a moments
Label: Art and Culture
Next Post
Previous Post