Posted by: Epictravelers | Updated: June 02, 2013
Kenduri is an epic mechanism of traditional social life of the community built long ago and one of the forms of development of mutual cooperation activities (Gotong Royong) in the community. This ceremony we also call it "Kumpul Adat, Kumpulan Adat". The essence of ritual ceremony of kenduri is to share in the form of cooked food. In general, these dishes brought to the home to be enjoyed with family. This ritual ceremony is also one of the forms of connecting the ropes of brotherhood to form the wholeness and restore the rift around society. In the ritual ceremony not only about the distribution of food alone, but in meetings in this festivity also becomes an important information space to them.
The simplest form of activity is like: We invite them through information to the surrounding community, they or the community gather at our house. We are the perpetrators of the kenduri and they surround around the food. The food is prayed by the leader of the adat (kaum). Then they return home after the division or perfection in kenduri. For families who are unable to attend or representatives in traditional Kenduri events, close neighbors are obliged to bring the Kenduri and give to the non-attendant neighbors. For the community or still within its territory or group; distant neighbors, usually delivered on a motorbike to have their kenduri food received.
Usually the kenduri ceremony have calculated the number of citizens and adjust the amount of food in a package in a kenduri.
Purpose Kenduri
"Kenduri" or "kenduren" or "Sedekahan" have a purpose to teach the community to be willing and accustomed to share some of their sustenance to others peoples. This ceremony was also one of the form thanksgiving or the expression of gratitude, especially to the creator (God). They offered prayers in thanksgiving for his safe arrival (Selamatan). Another goal is to ask for the smoothness of everything desired (dihajatkan) of the organizers.
Kenduri is also a symbolic of humans not living alone, and focus on building brotherhood, behavior to help each other, and an attitude of cooperation.
"Behavior to help each other" in Kenduri is an exemplary attitude in which Kenduri's behavior gives charity to the surrounding community. Or a form of effort to complete the Kenduri (alms) ceremony that they do to be done together.
Traditional ceremony
In Java, this traditional ceremony the led by Rois or society of Java; they are called Kaum, and was followed by the head of the family (male only). In general the different types of food at the Kenduri, include: tumpeng, sego golong, peyek, gudangan, ingkung chicken, tempeh, potatoes vegetable, kluweh vegetable, kolak, apem, jajanan pasar, sticky rice, savory rice (Nasi Gurih), and others. This also depends on the type of kenduri ceremony. All the food is usually made by the perpetrators Tradition, but there are also through services or catering services, all using the same cooking type / contents. 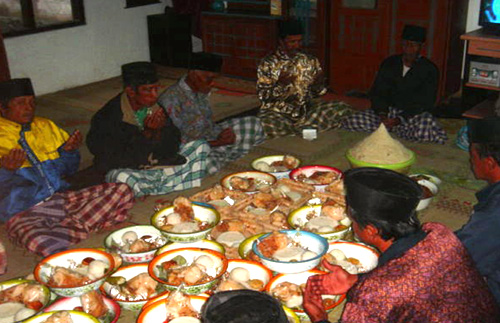 Image Reference: Traditional Culture Java
Symbolic
Each type of food in Kenduri has its own symbolic meanings such as: Tumpeng has a symbolic of prosperity. Sego golong a symbolic of Dewi Sri or Rice Goddess or Goddess of Fertility. Apem symbolizes forgiveness and others. Symbolic in these talks is basically their food derived, that the sources of food are flowed through intermediaries.
If Kenduri traditional ceremony is over, food is distributed. Distributing the cooked rice is called Carik. For those who can't attend or don't have a special representative, food distributed is usually done through the nearest neighbor.
Kenduri Among-among
The tradition of "Among-Among" is also a traditional ceremony such as kenduri, but not wear the ingkung chicken. The food served is also different, for example; gudangan vegetables, eggs and rice. Who participated in the event tradition "Among-among" only a partially or half of the community, and not the whole and usually for Tradition Weton (month of birth somebody according to the Javanese calendar).
Read also in Exploring the Post Reference: (The Old Javanese Calendar - Weton Day) opens in new window.
If the community hold this ceremony, guests are usually invited to come, and often through the circular letter or through the information space. In general, this traditional ceremony will use the information space openly. However, the Society may distinguish the types of information broadcasted through the public sphere and distinguish the community or group that must attend the ceremony.
While the traditional ceremony "Among-Among" is they provide information through "door to door" in providing information. So in this ceremony only people are selected or the nearest house only.
Kenduri or kenduren or Sedekahan is part of the crystallization in the epic traditional diversity of the culture of society that is still adjacent to epic of social life.
Read also in Exploring the Post Reference: (Traditions and Culture Yogyakarta) opens in new window.
Type (Class) Kenduri
Among-Among (Class)
Kenduri (Class)
The ritual ceremony is still performed by rural communities and urban communities. Scope in the culture and Traditional Kenduri is still a destination or interest in society.
Share a moments
Label: Art and Culture
Next Post
Previous Post