Posted by: Epictravelers | Updated: June 02, 2013
Kethoprak / ketoprak or better known Ringgit Purwa is one of the folk art of Yogyakarta, and epic art the most popular in Indonesia. In addition to providing a means of entertainment that contains the epic story, also includes a touch of Epic Education to the public. This art also contains a very high traditional philosophy, but also as a means to restore the epic majesty of a tradition of kethoprak the past, and beautiful on the tradition culture in the past.
The Basic of art development
Kethoprak is a beautiful form of folk art (Local Culture) based on "The Basic the Development of Javanese Folk Arts and Culture". Kethoprak is also part of the best epic art in Java. Included in the trip mentioned to took an active role specific the biggest purpose so that people know the ins and outs of the art world traditions. Thus it can arise awareness so deign to help preserve such art as one of the arts of heritage site in Java. 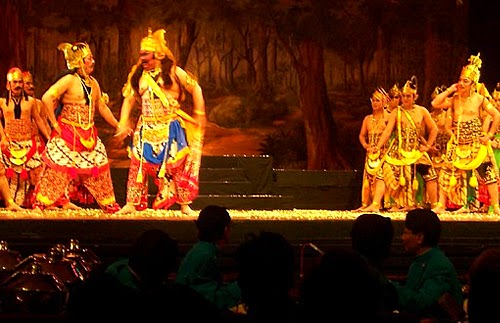 Image Reference: Kethoprak or Ringgit Purwa
This is what underlies the all kethoprak cinematic of Yogyakarta artists as place and art house, such as: Widayat, Bondan Nusantara and other artists. The art stage is an art park for them (Javanese epic artists). With to uphold and make a unified group art conservationist "Guyub Nyengkuyung".
In the preservation of this art is now kethoprak involving many officials, the government until Village chief, each participating gathered or a unified "Ngombyongi" and intention to get closer to the leader of the people. So Kethoprak Art becomes an art of life for this art lover, also became a new art world for those who are learning about this artistry.
Segment of stories
Kethoprak art displays various stories such as Ramayana art or Wayang art. This art requires between 15 to 20 people as kethoprak player character and not yet the amount of parts implementer gamelan. Kethoprak divided by 2 sorts of arts, among others: Kethoprak classic and kethoprak Plesetan. Kethoprak Plesetan practically interesting because nearly 99% contain elements of humor that makes the audience laugh. Although Kethoprak classical also has an element of humor, but only a interlude or inserts to convey moral messages, share news, great news, criticism or suggestion submitted to the audience funnyly. This segment is called Dagelan segment or a farce.
Segment that contains or tells about the romance, usually called Gandrung segment. This segment are chanting songs of seduction or a declaration of love to his partner. Jejer segments is segments or scenes in the palace, a meeting between the king, the courtiers and the Punggawa in the palace. Usually also use Java language in the opening song the Jejer or dialogue with sing.
Kethoprak drama certainly there is always a story that makes the conflict, and always accompanied by a war story or Bandhayudha segment. This kethoprak usually tells about the epic kingdom in Java or epic stories based on the Javanese kingdoms, such as: Kingdom of Mataram, Kingdom of Singosari, Kingdom of Majapahit, Kingdom of Blambangan, Kingdom of Kediri, Kingdom of Padjadjaran and so on. As well as the epic story developing in royal period, such as: Luthung Kesarung, Wali Songo, Panji and so on.
Epic performances
Kethoprak in general is usually done when there is a celebration, both individuals and villages. Such as: wedding celebration event, special events or ceremonies of Java. In addition to using the open stage, kethoprak usually can be enjoyed in local Radio and Television media.
As the change and development of the era; kethoprak also using Indonesian language, but it was only for show or stage a National scale. Kethoprak with the intent or purpose that can be enjoyed by all Indonesian people. And the reality of education, moral message, preaching or proselytizing, public criticism is much more easily absorbed through the show or be included in the traditional arts and culture.
Kethoprak art is one of the longest drama arts in local entertainment. The duration of Kethoprak Arts is very long between 7 to 8 hours. Theater of long duration is typically only used in folk performances or villages.
Traditional music gamelan
Gamelan is a traditional Javanese musical instrument. In this art, they welcome through a variety of Javanese music. This art is called "Seni Menabuh". "Seni Menabuh" is also called "Karawitan" or a word that comes from the meaning of a complex, or complicated in music. Gamelan is the strongest composition for stories or plays on kethoprak performances. This music became the balance of a drama performed by players kethoprak. So the epic travelers can enjoy the beauty of the background music of this art.
Read also in Exploring the Post Reference: (Gamelan Art Epic Java) opens in new window.
The world of cultural
Kethoprak Arts is one of the oldest cultural paradises in Java, and one of the epic majesty in the brilliant century in Java. In addition to being a Javanese the epic cultural world, this is also the protection and preservation of epic ancient cultures that once existed in brilliant century.
Kethoprak art is one of the adventure of a beautiful folk art in Java Island, and make a good experience in the art world within of society the city Yogyakarta. Kethoprak Arts Icon of Jogjakarta - Indonesia is a small part of the quintessence of epic art and epic culture the drama Java.
Share a moments
Label: Art and Culture
Next Post
Previous Post