Posted by: Epictravelers | Updated: January 15, 2017
The Old Javanese Calendar / Penanggalan Jowo Lawas is part of the epic calculation of the science of Java the traditional mathematics. This is part of the Post Reference - Epic Discovery. In this case, at least in need of expert especially in traditional Javanese philosophy / Java science (Kejawen) and Javanese culture.
Javanese Calendar
Java people, the National calendar isn't enough. So many people who don't choose it, because it makes them confused in determining the important days, for example: Weton Day, Géblak Day, Selamatan, Parondan (Ronda activity), the determination "Pasaran Day" (the determination of traditional market) and even the determination of the wedding day. Thus, National Calendar just isn't salable or rarely used the Java people.
Javanese calendar is a calendar showing the year, month, date, day or time period that is decisive. [ National Calendar - Javanese Calendar - The calculation of ancient Java (The science of Java) ] is the foundation, system, and measuring every day important the Java people. 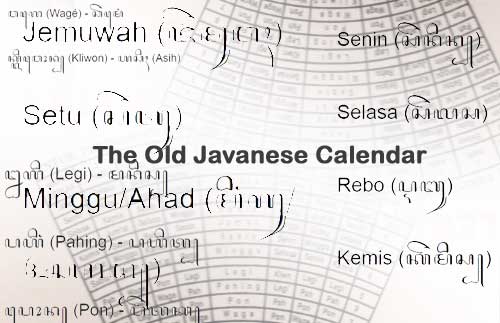 Java Month
Javanese calendar month is called the Javanese Month. Javanese Month has twelve months, such as:
Sentences and talk
This sentence has the same meaning.
Summation of Java month
Months of before and after
Java Year
In Java, there are cycles of 8 years, and consists of Alip, Ehé, Jimawal, Jé, Dal, Bé, Wawu and Jimakir.
This is snippet of National Calendar and Javanese Calendar. Example: Seven day.

Notes:
The Javanese people usually determine the type of Calendar talks:
Java People: [Dino Minggu Legi, tanggal 2 Januari 2017, sasi Bakda Mulud].
Translate: [Today: Sunday Legi, date: January 2, 2017. Month: Bakda Mulud].
Penanggalan Jowo Lawas
Penanggalan Jowo Lawas method is a part of the original Javanese tradition in traditional Javanese science epic calculations related to the calculation, addition, numeral of calendar, dates, days, months, years and even they can guess the determination of the season (Mongso) in the future. Each dating formula / (Penanggalan) will illustrate important of Javanese calculations.
Illustration of the calculation of the important the Java
An important illustration of Javanese calculations is an event that became a Java people tradition to be held in the coming years, for example: Event of Selamatan / selametan calculation 3 days - 1000 days. The "Penanggalan Jowo Lawas" has been combined with the National calendar, so that they can make examples of tables such as below and the year of the event.
Example of usage activity of the Javanese Calendar calculations are in Post Reference "Singir Jawa Kuno tradition".
Read also in Exploring the Post Reference: (Singir Jawa Kuno) opens in new window.
The formula of Penanggalan Jowo Lawas
Note: Not translated by author.
• Pakaryan becik.
[Keterangan Boso Jawi - Dina pitu, etungen netu ngen netu neptune dina lan pasaran, kanggo pakaryan becik. Gunggunge dina lan pasaran. Yen ganjil, gunggunge dina lan pasaran]
• Pakaryan sing olo.
[Keterangan Boso Jawi - Pakaryan sing olo, nganggo gunggunge (dina pasaran)].
Notes:
Dino Kotong is a complex calculation and structure as well as on a daily basis is important Java. Experts say "Dino Kotong" can be used to reply to criminal behavior. On the other side a said "Dino Kotong" narrow time or safe time to do something. Formulas "Dino Kotong", is a formula that can be counted numbers on the table. It is a formula for them or about the people of Java on the science of ancient Java. Whether what, the truth of "Dino Kotong"? Whether concerns the interests of culture during this time, or something about the keeping of peace and prosperous to their stay, or reject about disruption of their land.
Terms made ... Additional chapters: GAWE / PAKARYAN
The second table below shows the requirements to build or create house or employment. On any Java requirement to have a lot of intent and meaning which related.
For example: We make a house, the day in the calculation of Java is also very important and the rules that we do. This table shows only requirements but isn't mandatory. Each house describes the special aurora, so many people of Java a gave gold on the wood or buffering the roof before the roof is closed. They believe aurora home more comfortable, quiet atmosphere, cool also peace for the home occupant.
We didn't know that the house isn't only inhabited by us, but also the delicate creatures who also chose the comfortable nuances and calm atmosphere, without disrupting who owned the house. When seated and pensive as if there was someone who saw or pay attention to us in a room. It may be a picture of our minds alone, but a lot of people who think the same about such incidents.
The day that doesn't do the job Additional chapters: DINO
Trust and Java arrangement in terms of which aren't allowed.
Season Determination
The old calendar is also determine the cycle of seasons, but in today's world of Javanese calendar also has a great change and just as with the National calendar. They determine from the direction of the air motion, clouds, the thunder or rumble called season determination (Mongso) for plant species the suitable.
The Old Javanese calendar / Penanggalan Jowo Lawas is one part of Javanese Science which can only be questioned by people who are experts in the field of Javanese arts and culture - especially Javanese Science. Javanese calendar calculations are a small historical part of the formation of traditional ancient calendar the epic mathematics circulating in the society. This article doesn't include the calculation of the Islamic calendar, the Tionghoa Calendar, and the origin of the formula or use of "Penanggalan Jowo Lawas".
This table is a copy of the old books by Djardjo Dihardjo (Grandfather). In his book extensively covered the old methods, for example: Counting of Javanese calendar, an antidote to crime, repay evil, occult science, rajah, pain medications, chapter of dreams, chapter of events, and so on. All things about Ancient Javanese cannot all be shared with the public, that some Java Science should be hidden. Anyone can find out about the Science of Java, but only for those who want to really learn.
Science of Java isn't based on the progress or implementation of new technologies, but about chapters of natural sciences (Old style), natural (artless), natural events repeatedly, mystic, philosophy and a few things about the old magic methods. If we trace, some of the ancient Javanese sciences are related to the goodness of life, education on life on earth, welfare, planting systems, education, natural sciences, things that will or have happened, culture, custom and even tradition. That in this case; The ancient Javanese Science cannot be equated with a lot of books, history, beliefs of religion or beliefs of each traditions.
Share a moments
Label: Art and Culture
Next Post
Previous Post