Posted by: Epictravelers | Updated: August 05, 2013
Epic performing arts and traditional culture, presents classical Javanese music art. Gamelan is a traditional epic instrumental ensemble with many instruments that combine soft-sounding percussion instruments with melancholic sounds.
Gamelan is a musical instrument that is typical in Java. In Yogyakarta, gamelan has a distinctive tone and has very diverse characters. In Yogyakarta gamelan has played diverse arts such as: the sound of gamelan in the Palace, more famous soft 'smooth and authoritative. Jathilan art, Ketoprak and in dance rhythms, this also varies. This art consists of playing gamelan music called "Karawitan", those who "menggamel" or musicians in Javanese are called "Pengrawitan". Playing the tone and strains of the gamelan is called "Seni Menabuh". The rhythm of the music in the gamelan reflects the harmony of life and part of the life principles embraced by Javanese society. 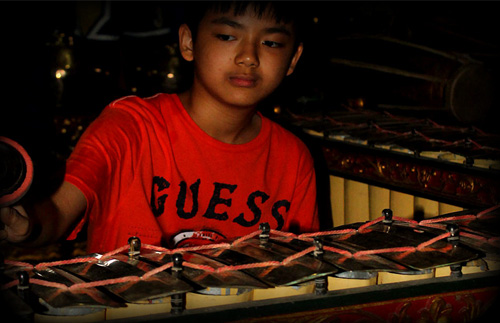 Image Reference: Gamelan as an educational vehicle.
Gamelan in Kraton Yogyakarta, really presents original sound that is not mixed with modern music equipment. In Yogyakarta art that has been mixed with modern music or musical instruments drums and keyboards, among others: Jathilan, Campur Sari, Wayang and Kethoprak. That too only a small fraction use.
If you visit Palace or Kraton in Yogyakarta, The Abdi Dalem in the palace, often rang the instrument Gamelan music is accompanied by dancers from the palace. Here also you can see how gamelan and how to use Java musical instrument. Below are most of the names of musical instruments from Java especially from Daerah Istimewa Yogyakarta.
Gamelan names:
Complementary Gamelan clasik:
Complementary gamelan in Wayang Puppets Art:
Gamelan art rules are not much different from the tone of international standard. Tone gamelan in Yogyakarta has a count of just: 1,2,3,5,6 and 7 (seven). Whereas in the Java language using the a count (ji, ro, lu, mo, nem, tu). If we play the gamelan is indeed produce sounds similar to a count of Java, so the learning must also be in the Javanese language utterance.
In playing gamelan, gamelan instruments sound between a punch and that another party is not the same, even so the way the game can be heard gamelan and strung with beautiful. In a stopping the tone lengthy gamelan. It just touched on gamelan body, so that the right hand is used to hit and the left hand to stop or reduce the tone that is struck in order to align the sound of gamelan is in play.
Gamelan is frequently played at night. Although without the use of electronic megaphone, Gamelan being played at night will sound a lot. In addition to bringing the warm atmosphere of the night, the orchestra adds comfort for the listener and can create an atmosphere of security, peace, and create a family atmosphere in the community.
For Menabuh art, I can not show in this article, so you can listen and study directly to my city of Yogyakarta. Many of your friends who study of several countries in the world, such as Country: Germany, Canada, Netherlands, USA, Suriname, Australia, Japan and others. Welcome to visit and study gamelan.
Share a moments
Label: Art and Culture
Next Post
Previous Post