Posted by: Epictravelers | Updated: June 21, 2016
Epic is one phrase that difficult to explain in words. But it can usually express admiration for something interesting, unique, beautiful to look, and rare to find. In Java, we also found the word "APIK" language. Apik is something that is often used by the Javanese; That this expression is generally used to express the admiration that has a very rich meaning and similar to some of the above description. In addition to the words we have mentioned, it also depends on what they see, such as: beautiful judgment, the value of art (classical value), great, and so on.
This collection is part of epic private journeys, tour video, and tour of album photo collection. We will collect some unique things "Epic Discovery" the based on adventure description so far.
Animal Lizard (Animals with the longest tail) 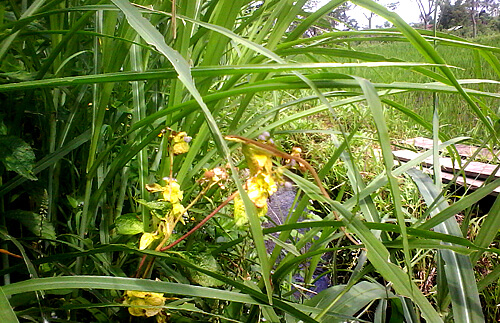 Image Reference: 2 days adventure with the longest tailed animal
There may be who don't believe the animal lizard that has a long tail can be more than double the length of the lizard's body. This animal has the longest tail between types of animals-lizards that we often see and discover in the surrounding environment. The size of this animal is about the size of the little finger with a length of about 10 inches (25 cm), more than two or three times its body length. When the animal is still small it has a tail shorter than the size of the lizard's body.
These lizards are including cold-blooded reptiles, the most widely spread green lizard habitat in southeast asia. Green lizard (Dacian olivacea) is a kind of lizard member of the Scincidae tribe.
The structure of the tail a little rough and much different from the structure of the body of this lizard. While the lizard's legs are made up of pointy fingers with small fingers, and don't have a glue cushion to climb a the tree trunk. So this animal can't climb a wall that is flat (slippery wall). While the breeding of these lizards, we also have not found any real evidence. But possibly through eggs like most lizard species. We didn't find long-tailed lizard missing, like a gecko or animal lizard that is often encountered in the surrounding environment. Is this animal the same thing about it? We don't know about the lizard's tail is missing, but it closes the possibility of the same incident.
How do they live in the dry season?
In general the life of these lizards prefer a cool environment and the adequacy of calm water to sustain life. In the dry season there are not many dry plants, these lizards collect their water needs on the sidelines of green leaves and morning dew, and settle in their slightly damp houses.
In Southeast Asia, especially the State of Indonesia. Animals of this species can only be found in some areas. In Yogyakarta itself is very much found in the area of paddy fields and in certain seasons is also difficult to find. These animals are found there are green and yellowish colors or In a foreign language known as Olive Dasia or Olive Tree, but close the possibility of this lizard depends on the age level of the lizard.
Wildlife adventures of long-tailed lizards (Lizard - Animal the longest tail).
Duration: 25:19
When sitting for a break, we saw these animals. We was very fortunate that the animals we find today benign. In this video, this animal is more attention to the camera. You can follow us explore on a video about animal green lizard. We've been processing videos of long duration to watch and share, you can follow related Youtube channel to see how many recordings during the explore in the area.
These animals prefer to live in the foliage, like grass, and bushes. Some time ago, I often see these animals in the bush to be a collection of photos on this site. It is also which we did in other places, but always didn't succeed in taking pictures. Because these animals are also very agile in different locations. These animals often appear in daylight or bright days, then these animals are often found in shrubs or grass as a sanctuary to sustain life from other predatory animals. And this animals often live in groups or not far from the same animal.
Many people say that these animals is "grass lizard" or "Green Lizard (Kadal Hijau)", but at the sight of this animal is also an insectivorous animal. In our place these animals are not pets but wildlife.
Epic Discovery - Human Face on the leaves Image Reference: The Natural World
Nature is the most beautiful color in the world and part of an amazing world. This image is part of: "Hidden wonders of nature". What you see in the picture? This is a very long journey in collecting and a beautiful adventure. This image is the color of the leaves, grown in the surrounding environment. This video is a collection of the final value of 14 collections of video an the Adventure in collecting "Wonderful Natural Colors".
If you see the cover of this discovered a lot of unique things on the leaves. We found: human face on the leaves, a crowd of people, Alien, pinguwin, birds, dogs, cartoon characters, face masks, even a figure that resembles a ghost and so on.
The circle in the picture is the "Hidden Miracles of the Natural World" given through paintings of nature. That leaves also have a typical life that maybe not everyone see the magic. In the sense is that nature also has its own culture to grow and live. It is also an amazing research to be known.
Duration: 7:33
Discussion forum
We review an attractive natural colors in this video, such as: flowers and leaves. Flower color can only be seen in a certain period of time or season. If the flowers bloom, the flowers will wither in the coming days.
How about the leaves?
The color of the leaves will grow continuously and presented a variety of colors. The advantages of the leaves is we can see the beauty anytime. Do you agree? and; What is the reason? You can discuss on this website.
Cayenne pepper with the widest leaves 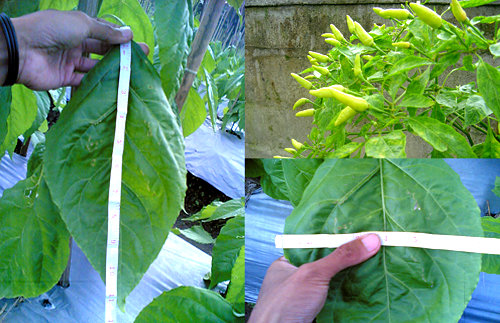 Image Reference: Cayenne pepper leaves (Cabai Rawit)
Cayenne pepper leaves has a length of 11.5 inches and a width of 7.5 inches, which is a measure of leaves we don't see than usual. The size of the leaves of chili is usually about the length of 7 - 8 inches and a width of 3 - 5 inches. In addition, due to differences in chili varieties. According to farmers, this plant is too much organic fertilizer soaked in water, and watering to the ground twice a week. So that thick liquid fertilizer will make a difference in this plant.
Cayenne pepper is one of the spices or herbs that are famous in Indonesia. This plant belongs to the family (Solanaceae), a class; (plant of season) or (short-lived plant) that grows as a shrub or a plant with a height of 1.5 m. In Indonesia, varieties of chili has quite a lot. Cayenne pepper is a class of horticultural crops that can be used for a variety of cuisines.
Indonesian people, almost 75% consume of chili. Most of cayenne pepper is widely used as a spice in the kitchen. Substances contained in chili is calories, minerals (phosphorus, iron content, calcium), fat, carbohydrates, vitamins, Niacin, can also serve to stabilize body temperature and endurance.
To add your epic adventure, as well as your epic discovery. Find your travel destination. Welcomes you to the exploring the Tourism Paradise.
Read also in Exploring the Post Reference: (Destination of Yogyakarta) opens in new window.
Thus a summary of about activities the Epic Discovery. The great travel to explore.
Share a moments
Label: Adventure
Next Post
Previous Post