Posted by: Epictravelers | Updated: June 02, 2013
Carnival Merti Earth Yogyakarta (Carnival Merti Bumi) is a ceremony to show gratitude, or as a form of gratitude to God Almighty of the rural people above all an abundance of grace that has been given in the hope the abundance of grace can be continuously provided to all communities. Merti earth is a ceremony of gratitude for God Almighty grace in the form of fertile land, abundant water, good harvests, and so on.
4 best images on Carnival Merti Earth 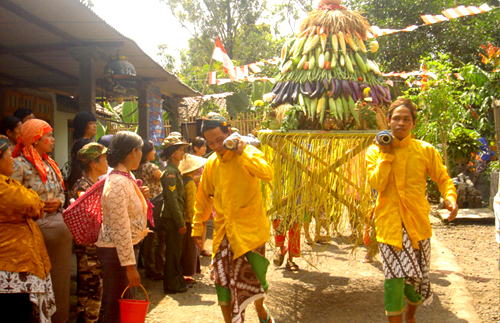 Image Reference: Carnival Merti Earth
Carnival Merti Earth usually include a variety of plants and food were then paraded in a procession or in the countryside, village or district (Depends on the community where they perform the ceremony). At the time of implementation of the Merti Earth carnival, participants usually wear traditional Javanese, dressed as farmers, as well as other costumes related to the theme that is also being carried such as: struggle, professions and others. Travelers can also explore the "Garebeg Sekaten Ceremony".
Read also in Exploring the Post Reference: (Garebeg Sekaten Ceremony Yogyakarta) opens in new window.
One is a rural area of Hargobinangun Pakem Sleman, Yogyakarta. Carnival Merti Earth is implemented to coincide with the anniversary of the Republic of Indonesia. So that in addition to the theme of agriculture is also about the struggle. An assortment of attributes ranging from traditional dress worn Java people, farmers, fighters, nurses, there are also a wide variety of miniature farm equipment, airplane, ships, large wooden replica, and that support the theme. The carnival is also presented in several theatrical scenes or drama.
To undertake or organize this carnival necessary cooperation of all elements of society that exist in the countryside, ranging from children to adults, from youth leaders, the RT (group section), the village head, etc. Because it carnival a requires a lot of thought, energy, and cost.
Preparation of carnival material and "Ubo Rampe" is not enough one or two days. Starting from the preparation of costumes, making materials or materials that will be directed to the event procession takes time and patience is not small.
A week before the day of the event, there was a great public interest in preparing the procession. Start of the ceremony rehearsal, making various miniature vehicles, making mountains or cone and so forth. Each group displays everything differently, all trying to display the most interesting and unique attractions. First group for example create a miniature helicopter, featuring art jathilan, ambulance and a theatrical scene. The second group is a featuring theatrical action during the struggle, Uborampe the wedding ceremony supplies and large wooden miniatures. Group three is a featuring art jathilan, miniature a Salak fruit, and ambulances. Group four is featuring miniature ships. Youth groups make mountains from various types of agricultural products and so on. In addition, each group must make a yellow rice cone or a "Gunungan" for the parade. 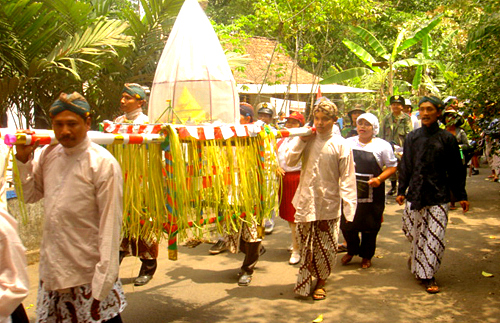 Image Reference: Parade of Gunungan
Before the ceremony carnival started, The first participants gathered at one point and then lined up sequentially. Prior to participants walk, first by praying that the carnival which will be implemented to run smoothly. Participants then received a referral from one of the members of Parliament (Mr Farkhan Harriem), and village heads Hargobinangun (Mr. Beja Wiryanto) before finally released symbolically with a ribbon cutting by Head of Pakem subdistrict (Mr. Budiarjo).
As "Cucuking lampah" or who led the way carnival are: Head of Pakem subdistrict, village headman Hargobinangun, and one Member of Parliament DIY with riding horses. Participants walk around the village procession through the main street of the village. Every path through which the participants display interesting attraction which has been prepared according to the theme of each group. 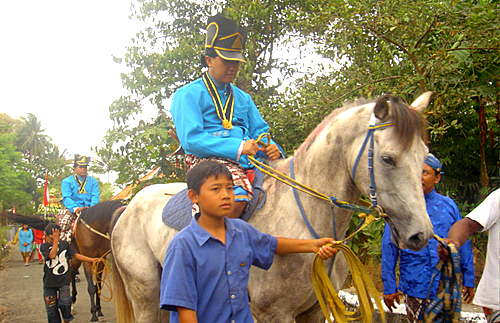 Image Reference: Bergodho or Javanese soldiers
After traveling around the countryside for about an hour, all the people gathered in the countryside to perform the ceremony. After resting for a while, all participants must attend the flag ceremony using Javanese language. At this ceremony as an inspector ceremony namely Head of Pakem subdistrict (Mr. Budiarjo). This ceremony was also attended by Head of Village, Devices of Village, Kapolsek Pakem, Koramil of Pakem, representatives of the Department of Culture and Tourism of Yogyakarta, Head of Hamlet, chairman of RT, RW, LPMD and community leaders the village. The interesting thing about this ceremony implementation, ranging from cue up to instruction using the Java language, but reading the '45 Constitution, reading the text of the Proclamation, Pancasila and the national anthem Indonesia Raya still use Indonesian language. Every team each led by a Bergodho or Javanese soldiers who wear clothing complete with a Keris. While the order or sequence of the ceremony as usual ceremonies. 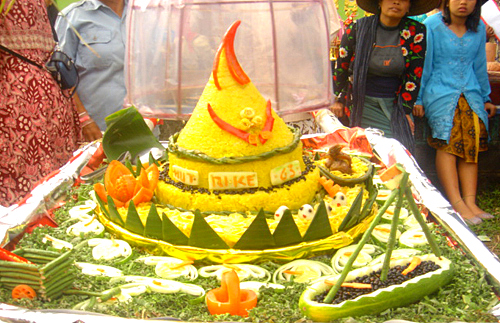 Image Reference: Yellow rice cone or Gunungan
Carnival Merti Earth Yogyakarta, the end of the event is the announcement of the winners of the parade, ranging from cones to costumes and the most exciting attractions. A series of ceremonies and procession closed with a meal together or "Kembul Bujono" which takes Gunungan that had been in the procession, as well as taking a mountain out of various types of agricultural products.
Discover the Carnival in Yogyakarta
Carnival is one of tourism activities and as a tourist magnet Yogyakarta.
Share a moments
Label: Art and Culture
Next Post
Previous Post