Posted by: Epictravelers | Updated: July 12, 2013
Sekaten is one of the main objectives for the outcome da'wah the religion of Islam by using strategy and culture in its development. Because of the da'wah and strategy; culture of da'wah would be more easily digested and absorbed by society at large. In addition, the impact of social education even faster. An example is the success of Da'wah "Wali Songo" in Java, including a sequence that contains meaning in this ceremony. 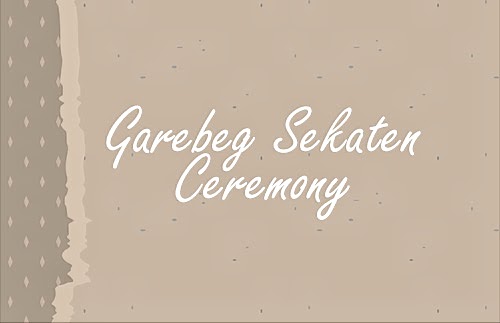 Image Reference: Picture illustration
Sekaten Ceremony
Sekaten ceremony is anniversary celebration of Nabi Muhammad SAW which was held on the 5th of each month Mulud Java (early Rabiul Hijriah). The ceremony was formerly used by Sultan Hamengkubuwana I, founder of the Yogyakarta palace to invite the public to follow and embrace Islam. On that date or sekaten ceremony is usually held in the main square of Yogyakarta.
On the first day in the evening, the ceremony began with a Golden chariot (Kereta kencana) Abdi Dalem or retainer of Kraton together with two sets of Javanese gamelan. Gamelan is named: Kyai Nogowilogo and Kyai Gunturmadu. This golden chariot Abdi Dalem originated from Ponconiti hall toward the Agung Mosque in the square north palace, escorted by soldiers and followers. Kyai Nogowilogo will occupy the north side of the Great Mosque, while Kyai Gunturmadu will be in the south of the mosque. Both of these gamelan, will be played simultaneously for 7 consecutive days.
On the last night, the two gamelan will be taken back to the palace to the stored back. Then the top event this Sekaten memorial marked by Garebeg Muludan held on June 12 (right on the birthday of Prophet Muhammad SAW) started in the morning.
All flocked to follow Gunungan with escorted by 10 kinds of warriors Kraton: Wirobrojo, Daeng, Patangpuluh, Mantrijero, Prawirotomo, Nyutro, Ketanggung, Surokarso, Jogokaryo, and Bugis, a Gunungan consist of food and fruits and vegetables will be brought from passes Kemandungan Sitihinggil, and toward the Great mosque.
Gunungan which symbolizes welfare of Mataram kingdom was prayed for and distributed to communities, community assume that a part of this Gunungan will bring blessings to them. All visitors like to have of the Gunungan section mentioned.
Garebeg Sekaten Ceremony Yogyakarta is a epic ceremony involving all the Kraton, all the royal soldiers and involving all levels of society. This ceremony includes socio-cultural ceremonies, religion, rituals and others.
Share a moments
Label: Art and Culture
Next Post
Previous Post