Posted by: Epictravelers | Updated: June 03, 2013
Wayang Kulit (Puppet Shadow) known since prehistoric times ie about 1500 years before Masehi. Indonesian society embracing animist beliefs form of worship ancestral spirits the called "Hyang" or "Dahyang", manifested in the form of a statue or picture. Wayang also known by the name Ringgit Wacucal.
Wayang is an Indonesian traditional arts are mainly developing in Java and Bali. Wayang has been recognized by UNESCO, as a stunning cultural work in the field of narrative of epic stories and beautiful precious art. Wayang includes art and culture in category; "Masterpiece of Oral and Intangible Heritage of Humanity". Indonesian Wayang Day is celebrated in the month of November in Indonesia. 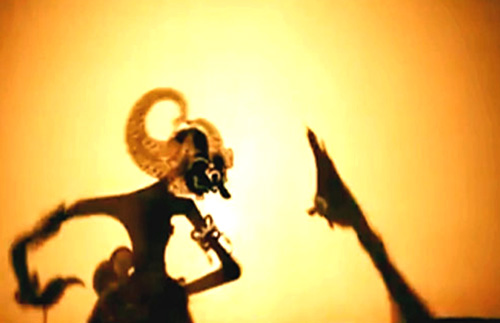 Image Reference: Wayang Kulit or Ringgit Wacucal
Ancient cultural structure
Wayang is an ancient cultural structure that is a civilization of a people who have a wealth/glory of art and culture is very high, especially in the art culture speaks (Bertutur). The epic story becomes the basis of more advanced balances and symbolic balance of life in society, and the way they appreciate the beliefs of ancient traditions. Wayang has hundreds or even thousands of foundation in the art of puppetry.
Wayang is one of symbolic including in the field of belief or religion, value of tradition, cultural value, and shimbolic of art world, and world of natural culture. The quintessence is mainly formed on Wayang characters (Sinom). Sinom is a customary attire on wayang, as well as clothing worn on the Javanese people. Another synonym is a form of makeup or dress in the wayang characters. Wayang Kulit has about 60 sinom. And each sinom has different meaning and purpose, especially sinom on wayang character.
Theater
Indonesian people know Wayang art as one of the most popular traditional artistic epics, and an amazing theatrical in Indonesia. Wayang is defined as "shadow", an art that refers to a theater utterance that uses shadow techniques and the lamp effects (Blencong). So in this theater the Javanese call "World of Pewayangan Art "
"World of Pewayangan Art" refers to the introduction of Puppet art and culture. Related to it is the actor of Dalang, artistic gamelan music (karawitan), the process of music art, Sinden, and also the shadows in the epic story in wayang art which is a story taken from ancient literary works.
World of Pewayangan Art
The deployment of Wayang art in Indonesia has a variety of arts performances and activities, such as: Wayang Kulit, Wayang Golek, Wayang Wong (person), Wayang Kancil, and the present era emerged new wayang artists; such as Wayang Hero and the movie artist.
Wayang Golek is more real to such as doll. While Wayang Kancil is a custom story for children or fairy tales. Wayang Orang (Wayang Wong/Ringgit Purwa) in the drama category Kethoprak and Ramayana.
Read also in Exploring the Post Reference: (Kethoprak Arts Icon of Jogjakarta) opens in new window.
Explore the "Wayang Kancil"
Story of "Wayang Kancil" is a classic story that contains the animal characters as a wayang character. This is an epic world of "Wayang Kancil" the based on a leather wayang show with figures of various species of animals in the forest.
The beginning of the creation of "Wayang kancil" is a concern when many children are turning to television and start to leave a fairy tale. This wayang was created by Ki Ledjar Subroto (Grandfather) to inspire children's love of fairy tales and the traditional art world of Pewayangan.
The "Wayang Kancil" staging is the Wayang that inserted moral messages ranging from education to the environment. Through a "Wayang Kancil" this can be a bridge for children to know, and love the "Wayang" which is one of the most beautiful original art in Indonesia. This Wayang art was introduced since 1980 to realize people's love of the original art of Indonesia.
Wayang performance
"Wayang Kulit" played by Dalang. The "dalang" is the essence of the classic story of an wayang performance. Dalang is to play a sound at a time of a story. The dalang uses "Kepyek" on the feet and "Cempala" in hand. Kepyek is a companion while doing a story or a tool that is usually to accompany the wayang movement, and to accompany it as if the wayang began to move. Then the "Cempala" serves as a beater in the box (wooden box) and sounded when opening or when running Wayang Arts.
The background of wayang art is called "Gebyok" or "Kelir". Lamp lighting is called "Blencong". In the modern era, Blencong didn't use the usual flame lights (Lamp/Torch), but now using electric lights. While "Gedebog" or "banana tree" serves as a stick wayang.
The advantages of puppet art is the art of wayang can be seen from the front or behind the screen.
The singer in Wayang art called "Sinden". Sinden as a song carrier. And traditional music Java called "gamelan". The music of wayang has been equipped with modern tools such as: Keyboard (orjen) and drums. Song in the Wayang art, such as: campursari song, dangdut songs, folk songs, songs of the archipelago, Java song, pop songs, regional songs, national songs and even songs from various countries in the world. While the story of wayang, amongst others: Srikandi, Goro-goro and others. Epic travelers can certainly enjoy the beauty of the art in "World of Pewayangan Art Indonesia".
Read also in Exploring the Post Reference: (Gamelan Art Epic Java) opens in new window.
Show Wayang Kulit
In Indonesia, especially in Yogyakarta Special Region. Wayang Kulit Yogyakarta can be heard on radio stations and can be watched on local television channels in Yogyakarta. The radio transmitter will broadcast the art of the puppet all night long (full time). So this art becomes a beautiful art that can be heard by the surrounding community. In addition to the efforts to preserve the art and culture, through the electronic media can inspire the people involved. They can give to express thanksgiving or send letters to someone publicly. This letters can be delivered by a radio announcer when pause or when advertising.
Share a moments
Label: Art and Culture
Next Post
Previous Post