Posted by: Epictravelers | Updated: July 14, 2013
Mul-Mulan is one of the most popular epic traditional games and the world of traditional games for children's games. Mul-Mulan was taken from the word "Mul" or victory, while "Mul-Mulan" was a win which could be said between the two sides in turn to win. That in this case: players in the competition aren't always won continuously, but also there is defeat in playing the game. But "Mul-Mulan" is better known as the term game. This game can also be done by adults. In addition to an exciting game, this game can also sharpen children minds, because it contains of epic strategy game.
A long time ago, pattern images in this game, simply drawn on the surface of the soil as a medium. This game can only be played by two people, while the tools needed to play is 3 chips, and the media should be different to the opponent.
The field of Mul-Mulan game.
What does Mul-mulan field shape look like? The field of the Mul-Mulan game looks like this. Although it looks simple; They certainly have a certain goal to achieve excitement in this game. 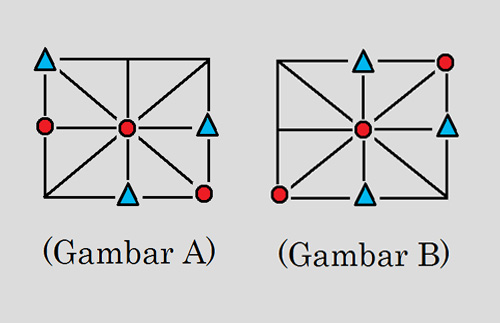 Image Reference: Traditional Games
Their simple media uses chips, such as: stone gravel, tiles, pottery, fruits, seed and so on. Usually the kids play this game because there isn't much time during school breaks. So the Mul-Mulan game is more often done by school children.
Because it is made on the ground, the children's hands often dirty. It is the experience of the past and makes to impress everyone, that their ingenuity, there's always in the minds of childrens.
The game is the most prominent "inhibited", so that the same media tools aren't parallel with the other chip. This is different from Bas-Basan game. And said "MUL...!" if we put the chip between the parallel straight lines, either our media or opponents. See (Figure B). "MUL" or win in intent because the chip of players is a parallel to the line pattern. Travelers can also say it. So this game is better known called Mul-Mulan game. Travelers can also find this game which is almost the same in the Bas-Basan game.
Read also in Exploring the Post Reference: (Bas-Basan Traditional Games) opens in new window.
How to play ?
Mul-Mulan games is pretty easy. Each player must hold 3 different chip with opposing players. The first is, grab the first player who has the right to put the chip. Then switch your opponent interchangeably to put the chip (System of replacement). If the chip is inserted misplacement or selfish for us to quickly win the game (making parallel), and forget impede the opponent, it could be we are losing in this game.
The way run it just shifted to and fro so as to form a straight line, either horizontal, vertical or oblique line, on the right or the left, on the top or the bottom. See (Figure B).
For the game winner in Mul-Mulan, the player has the right to put the first chip in this game. Easy enough in this game and good luck with your friends.
The goal of the game
What are the goals of this game? The traditional game is a game of culture and towards a simplicity, on the other hand is to educate for them about the intentions of a friendship and their familiarity with other friends.
Mul-Mulan Traditional Games is one of exciting games, in addition to waiting for their time during school break, as well as a medium of friendship and togetherness among them while in school. Simple games become the perfection of their friendship, especially utilizing traditional games.
Share a moments
Label: Epic Traditional Games
Next Post
Previous Post