Posted by: Epictravelers | Updated: August 25, 2013
Welcome to the Museum of Mount Merapi as a manifestation of love to the Museum Tourism. Merapi Museum is one of the only epic volcanology education rides in Yogyakarta, and new best travel to slope Merapi adventure. This museum collects and archives valuable things as a documentation center, as well as preservation and conservation of nature and culture. New vehicle for educational tour to the society, and the introduction of post-disaster archives. Discover your experience with educational nuances, this Museum is precisely located in the hamlet: Banteng Hargobinangun Pakem Sleman Yogyakarta. The street address: Kaliurang Street KM 6/44 Yogyakarta. 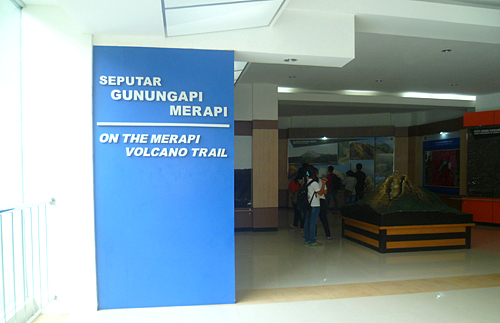 Image Reference: The room of Museum
Top travel route
The museum is adjacent to the natural attractions Kaliurang. If through Road Kaliurang is 600 meter south of the entrance of natural attractions Kaliurang. While the road area doesn't support the use of Bus.
If travelers have entered into a tourist attraction nature Kaliurang get through the intersection before the Icon monuments shrimp and then to west, then south to the junction. Travelers can also following the route of travel from "Panti Asih" or "Disaster Oasis" to the west (Jl Kaliurang 21.5km), the junction takes direction to the north (Jl. Boyong). View the nameplate.
The inauguration of the museum building
The Museum was inaugurated by the Head of Geology Department of Energy and Mineral Resources (ESDM) on Monday 1 October 2009 by Purnomo Yusgiantoro. Museum of Mount Merapi is a vehicle of education that its use for the general public in an effort to introduce general knowledge about life on the slopes around Merapi. The building area reaches 4,470 square meters and is situated in 3.5 hectares of land. 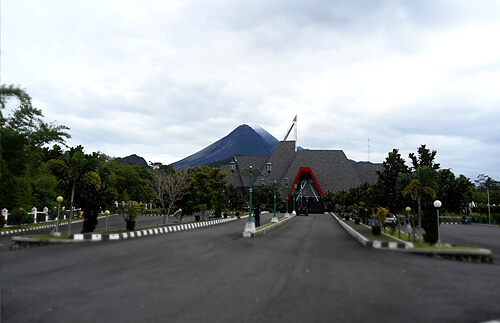 Image Reference: Building follows the philosophy of Java Yogyakarta
Cultural values and philosophy
According to the officer Museum Gunung Merapi; The main building of Museum is made ​​in accordance with the philosophy of Java (Yogyakarta) and the area of ​​Mount Merapi in the form of a combination of technology and cultures adapted to local customs. The museum building, made ​​to resemble a regular pyramid with a large dome as the center of the museum building. This is seen from the front view of the courtyard.
This building a symbolized an imaginary line connecting between Mount Merapi, Tugu Yogyakarta, Kraton Yogyakarta and southern sea. An imaginary line in such a way, such as: building on foot (Kamadhatu), body (Rupadatu) and head (Arupadatu). The style of development also resembles the Borobudur Temple.
Read also in Exploring the Post Reference: (Borobudur Temple is a Wonderful) opens in new window.
In addition, the creation of an imaginary line in the museum, is also manifested in the building of the wall of glass that can be translucent as well as the absence of a barrier in terms of imaginary lines. Temporal main entrance of the museum is made to resemble Ratuboko temple architecture. In Physiographic, building Museum Mount Merapi directed and facing up to create an imaginary line that is expected.
Museum Gunung Merapi to courtyard also referred to the building of a temple. On the left side there is the courtyard called "Tread" as a symbol of the north-south orientation of the system in accordance philosophy of Java. With the tip of a red dome as a symbol of the end of Tugu Yogyakarta. This is an information sheet as a museum and community pride Hargobinangun village.

Image Reference: Facilities and photos collections
Educational facilities and knowledge
The existence of Museum facilities and collections that are in the museum adapted to the functions of the museum is the preservation and conservation (maintaining and protecting nature reserves and culture), information (provide and develop knowledge about the object of knowledge is displayed), collection (collecting and archive valuable thing as the documentation center), education (providing for public science and culture appreciation center) and recreational vehicle (educational tourist attraction). All the facilities and the collection is still in the floor of the museum.
Collection in Mount Merapi Museum, such as: survey equipment, diorama, the Merapi Volcano Trail, as well as the lobby area. While the collection is stored, among others, Volcano World contains materials knowledge about volcanoes in the world, collection of human civilization and volcanoes collection contains equipment ritual homage Mount Merapi, a collection of the earthquake and tsunami, to ground movements, extra-terrestrial volcano.
As for the second floor of the museum, among other facilities for the travelers with film documentation shows about the "Mahaguru Merapi". The film can be watched simultaneously and of short duration as an additional medium for science through movies.
A beautiful tourism paradise adventure for epic travel time with complete trips on the slopes of Merapi to get an exploration with Jeep Merapi journey this year. Travelers can add travel list with a variety of other places of interest.
Read also in Exploring the Post Reference: (Merapi Volcano Tour) opens in new window.
Share a moments
Label: Museum Places of Interest
Next Post
Previous Post