Posted by: Epictravelers | Updated: September 29, 2013
Dakon Games is a fun traditional epic game in Yogyakarta and this game has also been used by the children of the Kraton family and the people of Yogyakarta and has survived to this day. This game is usually played during leisure time or relax. This game can only be done two people. If you or travelers want to do more than two people, travelers should try to create a new game page. Travelers can adventure and see the games from the results of research on "Traditional Games" or Play Traditional Games Yogyakarta.
A long time ago, Dakon game is only made in perforated soil and gravel as much as 7 chip and can be added again in number. So that more chips are used the longer the times spent in the game Dakon. 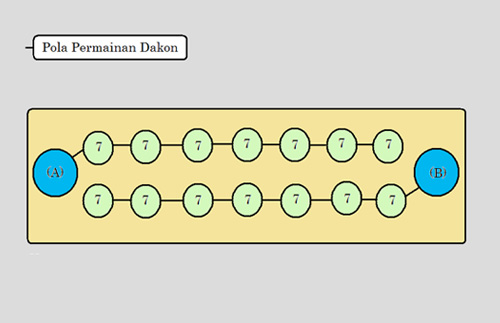 Image Reference: Traditional Games
In today's world dakon hole is made of materials plastic and wood carved. For large holes (A) and (B) is a container that determines the success of the value obtained.
If we are in the rotate, gravel or chip opponent mistakenly filling a large the container. Then this is the game should not be taken again, aliases the opponent profit or chip value.
Usually at the time of this incident says opposing players (NAS ...!!!) meaning NO or NO TAKE. Why is that? Because we forget or should ignore the container the opponent, that opponent containers should not be filled or emptied.
How to Play Dakon?
This game is very easy. Please see way of playing:
If while playing the last chip, we entered in a big hole. Then we didn't play or (OFF)in the play. This also applies to the opposing player. A play Dakon motion depends on the chip that we rotate and forwarded to the next hole that we find. And if at the last moment entered the empty hole or not there is something like: shoot system, memikul or piculs system, and fished system, or stopped in the bank / big container on you), then it should be moved to the opposing player.
Which determines the value of this game
A. Shoot System 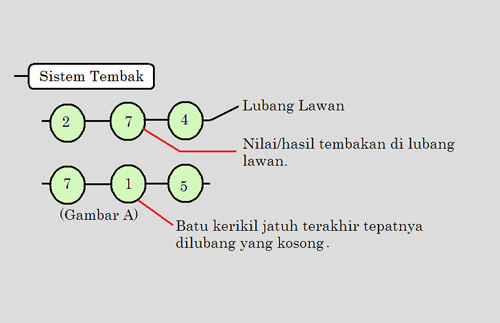 Image Reference: Shoot System
Shoot system occurs if the area belongs to us is last pebble in an empty hole and are in our area. Then the area of ​​gravel or chip opponent can be taken as our advantage. This happens with a straight line or in front of the opponent (See Figure A).
How much we earn chips, it depends on the chips in the container in front of him. So the more chips in the container opponent, the more value we obtain the chip, or a big advantage in playing Dakon.
Description (Images A): Last fall our chip or (1) and shoot gets (7) chip opponent. If the hole in front of us is empty, then it can't the value to be obtained. So it doesn't apply to use the shoot system.
B. Memikul or Piculs System 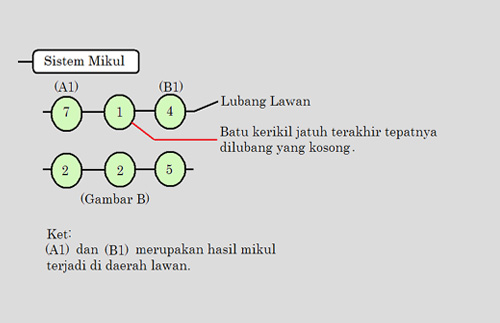 Image Reference: Memikul or Piculs system
"Memikul or Piculs System" occurs if while playing the last gravel on hand were in an empty hole chip (opponent). So that the holes on both sides of pebbles or chips belong to us. This is a double value in playing the game Dakon. So that greater profits. Great value also depends on a lot of chips (holes) of the amount of chips opponent / opponent hole. Using the "Memikul or Piculs System" is the main purpose is We minimize motion of opponent to running because opponent to the fewer chips. (See Figure B).
Description (Images B): Final fall down area opponent, (A1) and (B2) or 7 and 4 chips Mikul or Piculs system results.
C. Fished System 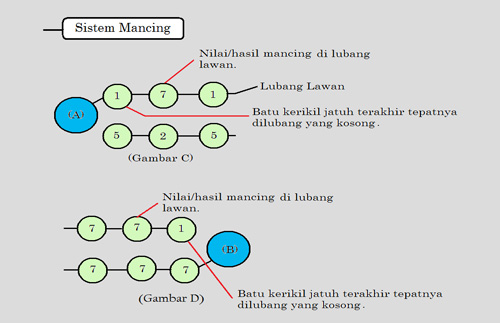 Image Reference: Fished system
"Fished System" occurs if at the time the chips fall was on the empty holes / area opponent. And precisely located corner of opponent, either right or left corner. (See Figure C) and (See Figure D).
Description (Images C): Final fall down area opponent. This should not be using mikul system, because there is a large container beside him. This also applies to all players in the Dakon Game.
Big hole we or opponent player can't be bothered in any form. This large hole called bank chip that determines the value of winning in the game Dakon.
Description
Song of Dakon (Lagu Dolanan)
Dakon Game is usually performed by the children while singing. This song is called Song Dakon known by children. For other children who hear this song kept coming and usually come alternately play, or they prefer to get together and make the same game.
Dakon song is very short and only a few lines. Several lines dakon song is often sung over and over again by children in earlier times to the present. Intrigued by Dakon song, Take a look at below.
We apologize, this Song is Java language. Don't be interpreted in the (Tool or translate language).
"Yoo do dakon ...
Watu item ...
Cacahe pitu".
This game can be made in any form. Such as: plates or other which resemble the pattern shown above. Dakon Game (Traditional Games) is one of the regional cultural games that can still be found in handicraft shops in Yogyakarta city. Congratulations play with your good friends. Greetings successful and gain the victory.
Share a moments
Label: Epic Traditional Games
Next Post
Previous Post