Posted by: Epictravelers | Updated: December 02, 2013
The city of Yogyakarta is well known as the city of education or school city, but it is also known as the city of Gudeg. Gudeg is a traditional food of Yogyakarta which easily found along major roads in Yogyakarta. But didn't close the possibility of this type of gudeg dishes easily found along Malioboro. Then what kind of Gudeg? please follow the epic tour.
Gudeg is a food made from Gori fruit (Nangka fruit that is still young) with a mixture of coconut milk. In Yogyakarta itself so many kinds gudeg food and can be made according to taste like: panil gudeg or gudeg with thick coconut milk, gudeg merah (red), gudeg coconut milk plain, spicy gudeg and so on. Gori fruit also as additional sour vegetable. 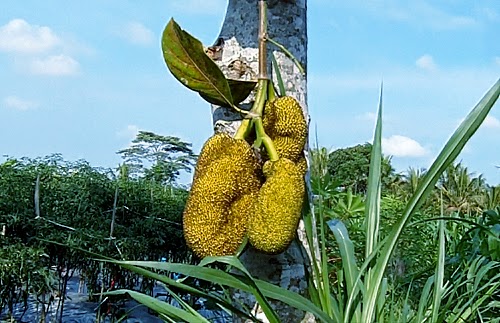 Image Reference: Jackfruit tree section
How to cook of Gudeg?
Cooking of Gudeg pretty easy, peel the fruit first outer section, then can be small minced or chopped large. In order not to have a hard structure, Gori fruit must be steamed until tender. How to cook it can give coconut milk, if travelers try with other dishes with the same ingredients, travelers can also with cooking methods with spice opor. If you want Gudeg dry food as sold in the region of Yogyakarta, the water can be reduced coconut milk. To create the distinctive flavor can be made sweet or salty flavors that suit your taste.
In order for this different food flavors, this dish can be added to the beef into small pieces to add aroma and flavor of these vegetables. If you like spicy taste with chili can be added in the cooking.
Gudeg dried vegetables will be more typical, gudeg vegetable when deep fried. Savory coconut flavor that will be increasingly felt on the tongue, because the thick coconut milk will produce a taste of "Blendo". "Blendo" is the separation of coconut milk that is cooked continuously. So that produce a kind of new food with soft structure. It's gudeg fried vegetables will look brown and slightly sticky. As souvenirs of typical Jogja food gudeg you can obtain these foods with a special presents or Canned which have been circulating in the city of Yogyakarta.
Jackfruit tree section
Further recognize this tree, so that travelers can recognize this fruit. You can see the science of plants or according to the science of Java. Most of the Javanese society, jackfruit trees have a lot of names in each section. Let's look at the names of the parts of this tree:
This tree is called a "Jackfruit tree", leaves called is "Ramban", flowers called is "Angkup", small fruit called is "Babal", young fruit called is "Gori", full ripe fruit called is "Jackfruit (Nangka)", Small fibers called is "Dami", while the seeds are called is "Beton".
Jackfruit seeds have a high carbohydrate content, low fat and contain enough energy. This fruit when ripe will have a distinctive and taste sweet. The water content in the fruit is quite a lot and can also as a basic drinks (juices). Additionally, jackfruit seeds can for stomach medicine. But the seed is still not used in medical drugs. Perhaps of you who want to try to examine the benefits and common use of the Jackfruit seeds. Please come in our town in Yogyakarta.
Gudeg "Manggar" and "Pondoh"
Gudeg Jogja Traditional Food isn't only young jackfruit as a food ingredient. Other materials Gudeg food is made of "young of Manggar" and "Pondoh" of coconut material.
"Manggar" is part of the stems and flowers on the coconut tree. While "Pondoh of coconut" are fibers of coconut trees are still young. Pondoh name is in the core part of the coconut tree. The sections include: manggar, leaves and stem of coconut. This Pondoh can also be eaten straight away and crunchy. In terms of taste really variations, depending on the type of the tree.
Price "Gudeg Manggar" very expensive, because the material is hard obtained. "Gudeg Manggar" is related to sustainability of coconut fruit. While "Pondoh of coconut" related with living tree, so as to obtain food ingredients; "Pondoh of coconut" should cut down a coconut tree. Pondoh of coconut a taste sweeter though with a little sugar in mixing in cooking, because the pondoh material.
Gudeg Manggar food is a rare dish and not easy to find in a stall or kiosk Gudeg typical food providers in Jogja. But chances are you can get information from a typical Gudeg stalls at the Jogja. Not enough until this adventure, travelers can also explore with "Wonderfood - Epic Hunting Gudeg Jogja".
Read also in Exploring the Post Reference: (Hunting Gudeg Jogja) opens in new window.
Share a moments
Label: Adventure
Next Post
Previous Post