Posted by: Epictravelers | Updated: December 01, 2013
Do you still remember this game as a child first? Geledekan is a game of toy cars made of wood. This Geledekan not ordinary cars, which just pulled it. See (Figure A). In Yogyakarta geledekan were riding is usually in children, and only one person climbed. Geledekan also often run by three children, the first interesting part geledekan, the passenger and driver. 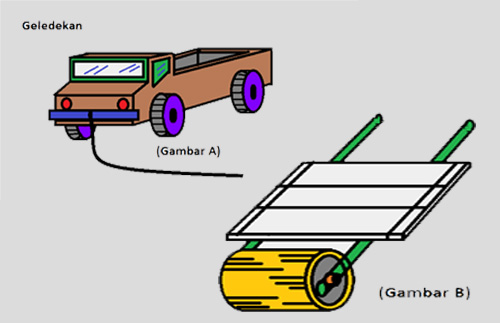 Image Reference: a game of toy cars made of wood
To prevent rapid deterioration wheels are often made from pieces of jackfruit and teak wood and axle or wheel hub normally use an iron that is not easily bent. Then the rope using Dadung plastic or rope made of bamboo. In order to appeal to kids often add colorful decorative lights that use battery power. Lights batteries typically used in the afternoon while enjoying the rise of the moon.
Geledekan (Figure B) is made geledekan thrust consists of a coconut tree. How to make it pretty easy. Geledekan When the game is usually made about a neighbor who cut down coconut trees there. And there is often a residual short as a prop. Because it can not be used for household fuel and are often left to rot just like that, and then the kids back and a hole cut in the middle as the center of the wheel. So that children can be climbed, then given a seat of bamboo or plank. Geledekan is in addition to the children's play turned out to be also used as a transport.
The vehicle is also often used by parents as freight vehicles such as sand and stone. Sure cheaply made, although it is very heavy vehicles to used for them.
Geledekan (Figure B) it turns out to be easily damaged. Damaged often happens is when a hole is made or wheel center has outgrown, making it difficult to push. It can us knowing it that the coconut trees in the middle easily damaged. All are used in this geledekan game or used in home construction.
Share a moments
Label: Epic Traditional Games
Next Post
Previous Post