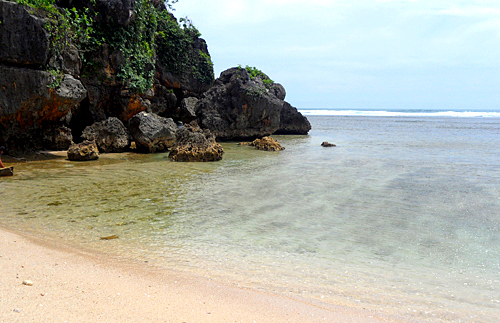 Image Reference: The beauty of the beach and the Drini hill
Drini beach is quite convenient for those which like to bathe in the sea. In addition to a fairly broad, Drini beach is quite far from the rapid flow of the waves so as to provide comfort while playing water. So for those which love the sea waves which a little quieter as a means of playing in the sea water, Drini Beach which could be one of the next destination of your choice.
Around the coast there are classic shacks provided by residents near the coast, as a means to relax, calm, rest, chatting with the beach atmosphere.
With a bit of effort to climb the hill-rock, we also can enjoy the beauty of the vast sea with various gaze out to sea. For a more in-depth look at the Drini beach, we can climb the hill-rock to the east which now starting to build roads, and then we also can through the hills in the northern part or side of the highway. In addition, we are also can cross the sea to better conduct further surveys. 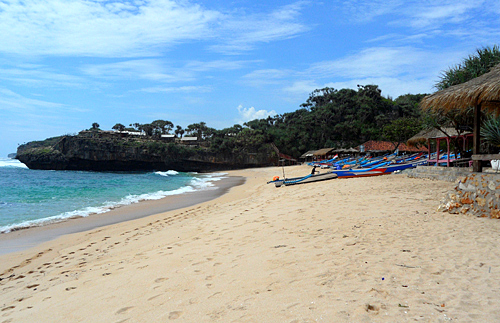 Image Reference: The beauty of White sand
In the west there is the same white sand. On the side of this coast is the center of the fishing pier, after fishing in the sea. In the north there is also a resting place as a means to relax. At this point we can also see the harvest of fish from local residents which provide also for the guests as souvenirs at home.
On stretch of coast the west side there is also shack to relax. If you go there we can through a simple ladder provided by local residents. Here, if you are a travel journalist, a little there is serenity to make notes or reviews Drini beach with a cool atmosphere with classic pandanus trees around it.
According to local residents, houses around the Drini beach is a place for a stopover or just a break at sunrise, although it seems a village / community with a permanent home. Although there which stay, likely only people associated with fishing effort for fish.
Share a moments
Label: Beaches Places of Interest
Next Post
Previous Post