Posted by: Epictravelers | Updated: June 02, 2013
Macapat is one of Java educational epic arts (Tembang/Lagu Adiluhung Jawa). Macapat is also better known as a song or epic of traditional Javanese poetry. Each stanza can have a line of phrases called "gatra", (Guru gatra = tembang has 4 sentence lines). And each gatra has a certain syllable "guru wilangan". (Guru wilangan = 12, 6, 8, 12. The first sentence is 12 syllables. The second sentence is 6 syllables. The third sentence is 8 syllables. The fourth sentence is 12 syllables).
The final rhyme sound called the "Guru Lagu". (Guru Lagu = u, a, i, a. The syllable end of each sentence is vowel u, a, i, a).
The means song or tembang is sung a lot of songs and read aloud, clear, in tune with the song. And got a special appreciation for the long tone that can be sung beautifully. Usually "macapat" interpreted as "maca papat-papat" or read four and four separate, that the sentence line is interwoven every four syllables.
Macapat art has a tone according to a certain level, such as: Macapat children, Macapat middle level and Macapat special level. Artistry Macapat has a tiers who different-diff, so it requires a special understanding to learn. 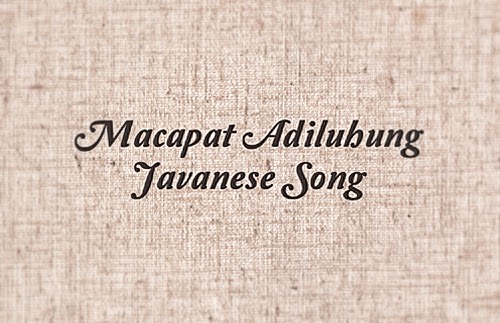 Image Reference: Javenese Song - The Adiluhung Jawa
Macapat art existed since the history of Mataram, and is an authentic artwork in Java. This Macapat usually depends on the nature of the contents of the text of story. The objectives include: artistic inspiration, animisme, introducing laws, customs and rules. Macapat art first used in the Kraton family; and now anyone can learn, to listen or learn.
Besides the art macapat become a great culture, it is said that macapat also believed to resist evil spirits.
Type of Macapat art include:
For the layman this song is very difficult to distinguish.
Read also in Exploring the Post Reference: (Singir Jawa Kuno - Javanese Song) opens in new window.
This song is a song based on Guru Gatra and Guru Lagu. This song may be unrelated title on the top. Travelers may be present on this page.
Guru Gatra and Guru Lagu
Tembang Jawa:
The benchmark of the final teacher: u, o or four gatra is the same ending.
Gatra 1:
Gatra 2:
Gatra 3:
Meaning of Tembang/song: Bahasa Indonesia
Gatra 1:
Gatra 2:
Gatra 3:
Notes
Macapat art used to be often sung by adults only, and be sung either male or female. Ironically, macapat art education in the community is still small. On the other hand, art macapat rote and understanding are still certain people only.
Macapat art can also sung alternately. Sung to one person or more. Macapat Sinom usually accompanied by (Gamelan or Gendhing) or music at the beginning and end of reading Macapat arts.
Macapat art is Macapat Art The Adiluhung Jawa, the art of macapat is now introduced for children who attend school as a means of Education and Cultural Art of Adiluhung Jawa. And to preserve this culture is the start of inter-school competitions to revive this culture. So Macapat will evolve from epic stories, culture, and also a formal art in Yogyakarta.
Share a moments
Label: Art and Culture
Next Post
Previous Post