Posted by: Epictravelers | Updated: October 19, 2013
This is an image field Engkling Game next version. This game isn't much different from the way of playing on the (version: A) previous. Perhaps of you who choose the game that has a field like this one.
How to play ?
To find out more and clearly this game, you have to learn Engkling Games (version: A). Because this games associated with an article about it. 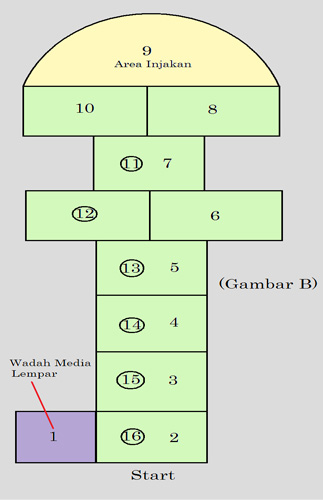 Image Reference: Engkling Traditional Games Version: B
The difference Engkling Traditional Game Version: B, among others:
• At (⑫ . 6) and (10 . 8) stepped both feet must be on the two boxes. While the players throw the media or the chip through a number that has been provided in sequence. This should also be done when the players return to Engkling.
On the box (10 . 8) we have to jump and turning right or left. It is also the difference in the Engkling Game (version: A).
• When the chips thrown exactly at half-circle number 9, the second player after footfall (number 8 and 10) throw the next stone that we must do the following:
The rules of Engkling Traditional Game Version: B
Select the rules in Engkling Games version B:
Description
The Ngayang system, limbs aren't allowed to touch the game line, this is the same as the rules on game version A.
How to take a chip with Ngayang System? (Ngayang System) = (Mengayang) = (Kayang) or flexing the body backward.
Ngayang System is body bend backward or the opposite of the body bent, such as yoga exercise. Mengayang isn't all players can do in the game Version B.
This game, we can also train flexibility of muscle joints that are beneficial to health. Another benefit is a stretch or relaxes the muscle, improve blood circulation, the nerve cells, etc.
Game Rules (version: B) on top, you can use either one, or both can be used in two steps or implementation in Engkling Games (version: B).
Half-circle is a game that isn't easy in game version B, and therefore we have to control the presence of the chip in the box, so it is easy to take the chip.
Half-circle allows chip fragile in the game version B. When successful in the stepped, fragile pottery should also taken up to in the START line. Then once outside the field, players replace them with new chip and start throwing at the next level. This session, there are also some players who may not be a play or OFF player.
If players throwing chip at that time very away, then it risks the players to try to jump into the chip (Half-circle area). If efforts stepped chip players can't do. Failure during take-chip, a chip isn't allowed retrieved or be left in place and players out of the field. Remember: It's only a chance 3 times, and than for any failure in tread area then replaced by the opponent.
Once the opponent OFF, and we've or do until to 3 times (Failure), we were allowed to throw chips on the line START again or throw back to the line of the Half-circle.
Create the rules on Half-circle Game Version: B
Select the rules on Half-circle Game Version: B
OK ... Friends, this is a Engkling Traditional Games Version: B, is complete now. Choose whichever you like in this games?
Share a moments
Label: Epic Traditional Games
Next Post
Previous Post