Posted by: Epictravelers | Updated: June 02, 2013
Discovery of the new epic temple in University Islamic Indonesia (UII). This temple is located in epic road; Jl. Kaliurang 14,5 Km of Yogyakarta, precisely in the city of Sleman. Kimpulan temple is said, because the site is located in the village Kimpulan, but the name of the site there is no clear certainty.
Discovery 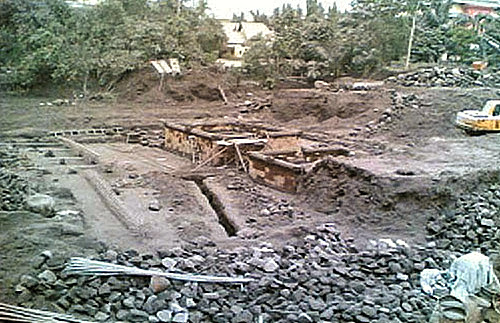 Image Reference: Discovered a temple in University Islamic Indonesia
UII Indonesia epic - Travelers Photo 2010 (Termination of restoration, Merapi 2010).
This historic site was discovered on December 11, 2009. The site was first discovered by an employees of the building, which will dig the ground to make the campus library building UII (University Islam Indonesia). The basic foundation of multiplication of 4.5 meters with a depth of approximately 5 meters, began to find a square stone smooth. Smooth square stone is a fence of a temple made of stone.
After digging a few weeks the site has begun to appear. This site consists of the main part of the temple, and the temple ancillary part (Perwara or companion). Main temple building measuring 6 x 6 meters and the ancillary temples (companion) measuring 4 X 6. There is a major part of the Ganesha statue facing to the west, the water hole, a pedestal (place offerings of stone), and Pripek or the stone box that serves to as storage of the letters spells, gold, valuables, etc. The entrance is carved on a stone wall on the east side facing the statue.
Architecture
Architecture of the Kimpulan Temple was found a Ganesha Statue, Lingga Yoni and some other statues are relics of ancient Mataram epic temples. Temple in the UII, is the temple site established between the 9-10 Masehi. The temple conclusion is one of the best temple sites in Java. UII Yogyakarta temple structure shows the main temple building has a roof, which probably supported by wooden poles. Another thing is also strengthened by the discovery of 12 stone pedestal of his round on the floor.
This site is a relic of the ancient Mataram so temple built 9-10 Masehi with a combination of stone and wood.
Lingga Yoni
Lingga Yoni is a center of worship. Lingga Yoni is a symbol of human creation and is considered something very sacred.
Ganesha Statue
Ganesha statue is a statue of a human-headed elephant, a four-armed statue that was sitting with a fat belly. Ganesha statue means god happy. A bowl in his left hand is being sucked with his long proboscis. This illustrates that he is never satisfied with science. Ganesha became a symbol of wisdom and science, dispelling all difficulties. The crown he wore as a sign that he was the son of Shiva and Uma. This Ganesha statue depicts the crown prince and warlord of King.
Restoration
Because the first discovery of a center, the soil excavation carried out two methods. First: horizontal excavation is conducted excavations clockwise, and the second vertically ie excavation in order to determine how the depth of this temple to the bottom.
The temple, which is found in the University Islamic Indonesia (UII) Yogyakarta area is still original and has practically no defects at all, the site is estimated gradually covered with soil, and is accompanied by the flow of water. This is reinforced by the presence of layers of different soil structure.
Kimpulan site is an important site. Archaeological Heritage Preservation Hall of Yogyakarta has mapped plan existing temple at the Islamic University of Indonesia. As well expressed readiness to conduct a total restoration of the ancient temples found in the UII campus area. The temple is considered to have high historical and cultural value that is in line with the spirit of education that do University Islamic Indonesia (UII).
The world of cultural artefacts
Temple is one of the oldest cultural paradises in Java, and one of the recollections in the brilliant century in Java. Culture is seen from the perfection of the work and civilization that the living community upholds in that century. As a world of cultural artefacts, the temple was of course has its own epic history. It is a positive value to educate the community and as a vehicle for public education. Because the temple which is currently still under excavation by the Archaeological Heritage Preservation Hall Yogyakarta, it needs to be restored so that its form could be seen as usual. So epic travelers can see the shape of this building.
Apart from being a world of cultural artifacts, it is also a superior protection and preservation of ancient cultural technology. Also the Kimpulan temple is a technological part of artistic and which is one of the brilliant cultural heritages in Java.
Read also in Exploring the Post Reference: (Borobudur Temple is a Wonderful temple in Indonesia) opens in new window.
The government will be ready to provide total disclosure of plan funding Kimpulan this site. Regarding the future management of the temple, then it needs to be discussed further. Because it involves the UII as land owners, including compensation for the cancellation of the UII library development plan and Temple Site on Campus UII Yogyakarta (the complex) to be built at the site of the discovery of the temple.