Posted by: Epictravelers | Updated: May 01, 2015
Ullen Sentalu Museum Yogyakarta is the historical sights Java art and culture which is managed by a private institution. This Museum was founded by one of the nobles of Yogyakarta - Pakualaman VIII, which is known to be close to family Kraton Surakarta and Yogyakarta. This museum is one of the Mataram dynasty history: Surakarta, Sultanate of Yogyakarta, mangkunegaran palace and so on, was inaugurated on March 1, 1997 by the Governor of Yogyakarta KGPAA.
Tourism attraction Museum
This place has an invaluable significance of the objectives of this museum was founded in Yogyakarta, especially learning the history of Java. This place is one of the most important goals that must we get when we vacation in Yogyakarta. This museum as one proof of the history and beauty of Javanese culture exist. In this place, we can learn a lot, such as: the history of the museum in the establishment, history of Gamelan, history of Java dancers, history of disputes Kraton, the history of Gusti the Princess Nurul, the Princess Tineke, batik culture conducted by the ancestors the Java, and so on.
This place is located on the slopes of Mount Merapi and is the best museum in Yogyakarta. Address: Jalan Boyong KM 25, Kaliurang Barat, Hargobinangun, Sleman, Kabupaten Sleman, Daerah Istimewa Yogyakarta. Before getting to know more about museum, We will give little information as your consideration before coming in this place. 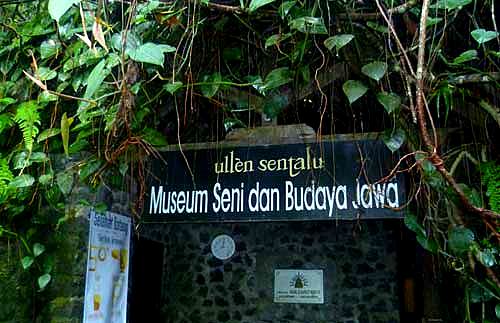 Adult, owner Permits: Rp. 30,000
Childern (5-16 years): Rp. 15,000
International Visitor
Adult: Rp. 50,000
Childern (5-16): Rp. 30,000
Description:
The last tour: 30 minutes before closing.
Included in the ticket:
Note:
When entering into this museum every guest isn't allowed to take photographs or documentation, except in a few places allowed by the administrator Museum, and every guest that comes in, about 25 or 26 people or the system gradually or queuing.
On the way we will be guided in 3 parts or the most important place: The first is the upper part or Kampung Kambang, the second is a space on the street or some sort of cave, and the third is the history of sculpture. 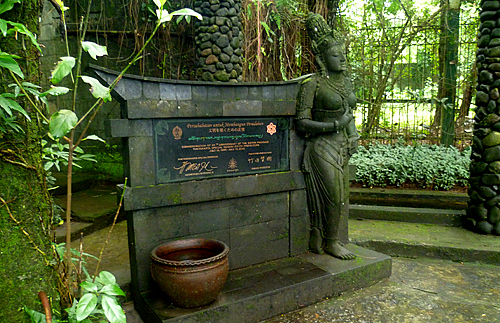 Image Reference: Garden nuance
Exclusive journey
The first room will be introduced to the history of established and the inauguration of the museum. Several explanations have been discussed above. Ullen Sentalu taken from the basic philosophy of Java is "Ulating Blencong Sejatine Tataraning Lumaku" which means "A flame lights as human guidance, the ordinances step and achieve in living the life". This philosophy is taken from a torch light in the Puppet Arts.
Another meaning is as a torch of the soul or knowledge, education, and understanding of a travel history. That history is an ordinances learn to respect something of events, thus creating a peace. Intent or other purposes established museum is to bring cultural heritage to the heirs.
Then towards the room of Gamelan Kyai Kupu and character dancer Java (Gusti Nurul). Gusti Nurul is a Javanese dancer showing the beauty of dance for the wedding of a princess of the Netherlands. Then step into the story characters Nobles (Bangsawan), travelers will be a lot to learn from the condition of ancient Javanese culture and all the rules, such as the clothing styles Yogyakarta and Surakarta, about local customs and levels of government.
The space above or Kampung Kambang, we can learn about the essay or article poetry Princess Tineke, Gamelan, history or meaning of batik, the story's Princess Dambaan (Sasana Kaputren Idaman), Siti Nurul Kamal Gray Ngesti Kusumawardani, and so on.
Rest room is a special room with the traditional drinks of Jamu Ratu Mas. 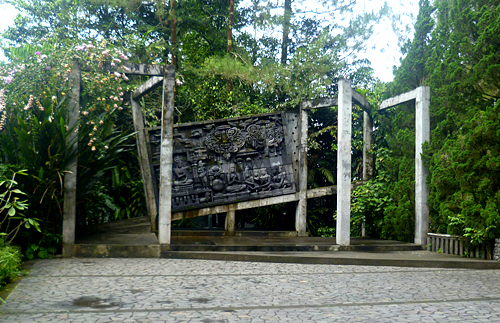 Image Reference: Ganda Miwa - Green garden nuances
The next trip the history of sculpture. This place we will get a classic story of Ganesha. Ganesha statue is one of the statues that are often found in the area of Yogyakarta. Ganesha stories is the stories handed down in the Java community.
The journey continued in the park Ganda Miwa. Ganda Miwa is one of Snippet view replica of Borobudur temple in pairs tilted. According to the tour guide, Ganda Miwa is a form of criticism, that now many are inattentive or neglect of culture. That the culture and history have something valuable to be preserved.
Last activity in museum, closed by a tour guide. We can see a collection of exquisite fabrics. In this area we also see the inscription "Building the friendship a civilization - Commemoration of 20TH Anniversary of The Sister Province Yogyakarta Special Region - Kyoto Prefecture" July 16, 1985 - July 16, 2005, (For Yogyakarta Special Region: Hamengku Buwono X, For Kyoto Prefecture: Takaki Takeuchi).
This museum is a knowledge that should we get, mainly stories and ancestral cultural values, which must be maintained and we develop together. This place museum at least you will get valuable stories and experiences.
Thus, the journey and explanation of our tour in Ullen Sentalu Museum Yogyakarta.
Share a moments
Label: Museum Places of Interest
Next Post
Previous Post